The surprise I wasn’t expecting in India… simplistic genius

Posted on July 16, 2013 by localpreacherforkliftdriver

I knew to expect a lot of challenges and cultural differences during our visit to India, there was such a simple thing though that I had not thought about…

On the 3rd July we all went to join different fellowship  groups which the students and teachers attended. Everyone ate a meal together hosted by one of the students and it was a chance for anyone in the group to share any issues they had encountered in the community.

I had the opportunity to be driven on a motorbike! as it was only a couple of houses up the road I decided to walk… I was the first to arrive and I was introduced to the students family. His mother was living with them to help look after the baby, I was introduced to his wife and daughter… I looked around thinking… so where is the baby?

When I first walked in the house I thought it was rather strange that there was a sheet tied up hanging from the ceiling, it was then that the student popped his head into the sheet that I realised that that was where their baby was! 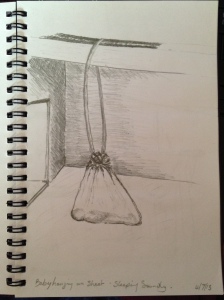 I had never considered until this point just how people without the means to buy something like a cot managed, yet it is such a simple solution one which may have been used for generations. Hanging a baby in that way will not just be comfortable for the baby, your ably to rock them to sleep but it also keeps the animals and many of the insects away from the baby.

I saw with fresh eyes that we can buy the best products but sometimes simplicity is a better solution.

I am a Methodist Minister taking up a new appointment in the North Cheshire Circuit, September 2019, with pasoral charge of Tarvin, Kelsall, Rowton, Christleton, Mickle Trafford, Oakmere & Bunburry with Tiverton churches. Views are my own.
View all posts by localpreacherforkliftdriver →
This entry was posted in Blogs and tagged eating together, fellowship group, India, simplistic genus, TaminNadu Theological Seminary. Bookmark the permalink.