Posted on June 14, 2013 by localpreacherforkliftdriver

(Written as part of my candidating portfolio. 2011) 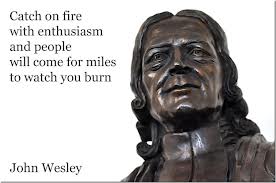 Methodist Charisms, as seen by Martyn Atkins (2007: 226) are the outworking of the Holy Spirit through the church into the world by the gifts of the people. At the beginning of the Methodist movement, this was done through personal faith development and social action. This is brought out through people responding to God’s word and the Holy Spirit, and being open to try new ways of engaging with God and society.

A social model was created by Wesley of clubs and associations, where people with similar backgrounds, needs or hardships created a common bond which knitted them together. The Methodist movement responded to the world around them through local and worldwide social issue. Here is where the Holy Spirit’s work is evident. If John Wesley and others had not responded nor engaged with the prompting of the Holy Spirit to the deprivation and injustices which were evident in society at that time, the gifts of the Spirit would not have been used which would have been detrimental to England and the world.

The place of the Anglican church at the time, which the Methodist movement came out from, had a status in society just as it does today; being a part of the English Constitution. Tabraham (1995: 5) says, that the church was a means of providing education and social welfare where there was no state provision, though the clergy were unsure how to respond to the changes the country was to go through. John Wesley was an Anglican priest, the influence he inspired was enabled by his own theological understanding and expression of faith. Tabraham (1995:16) states that there were four sources which Wesley relied on that were the foundation for the development of his thinking. This is where Wesley’s model of faith in action came from. Having read and studied the scriptures, he would then apply them to the people and circumstances around him, and then reflect on the effect or impact of the practical application, in turn grew the Methodist tradition.

Through this movement the development of an individual’s faith and response were vital, Atkins (2007: 95) suggests that through regular meetings which were open enough for people to develop at their own speed will naturally lead to growth in the local church. In the same way Wakefield (1999: 12) states, that the different groups which are characteristic within the growth of Methodism, were a place of growth through a disciplined pattern of study, evangelism and accountability.

The growth of Methodism was gradual. The Holy Spirit worked through the people, which gradually had an effect on others. Instant results cannot be expected, as the Holy Spirit does not control, and can only work through people who are willing to be led.

There has not just been one Methodist Movement, but many groups and societies in England and around the world. Turner (2002: 47) makes a very important point, that the class meetings, small gatherings of either the same gender/social group or related through work, gave an opportunity of growth as disciples and were together able to encourage and evangelize to others who were in a similar position to themselves.

How are these ‘Methodist Charisms’ essential for the future? The Methodist Charisms in many respects mirror the evangelism method within the early church, of small groups learning and worshipping together. Through this fellowship, and through the work of the Holy Spirit they evangelise to others they work with, in similar social groups. Through this method, Christians gain not just fellowship but strength working together, building each other up to trust God and the Holy Spirit to work in their lives making this a vital part of Christian discipleship, a place where Christians can find renewal, education and accountability which keeps people striving to be what God knows they can be.

This is particularly pertinent in society today, as advancements in technology change the way in which we interact. Many people communicate electronically today, and this presents a very great challenge for the church and mission. If we are able to take on this challenge however, through creative use of these advancements, we can continue to spread the Good News through whom the Holy Spirit works to bring the rich Methodist Charisms to a new and exciting place for the future of Methodism and the Glory of God.

Atkins (2007: 92) says, churches are not restricted to one expression of sharing faith with others. It is through variety of expressions where Methodism in the future needs to be present to engage and share with a greater variety of people within society. More and more, as society is developing, there appears to be a greater number of groups being created. Life is no longer split between work and home life as there is a greater influence of filling time with leisure activities, holidays and hobbies. These expressions may extend more towards individual encounters which take place outside of a church environment, also outside of a Sunday encounter. The charisms which had a huge impact on the growth of Methodism and working towards the Missio Dei which is the working out of God’s purpose on earth, are the ways in which people were not afraid to share what they believed, and this was done predominantly outside the walls of any building. This is what is vital to Methodism in the future, a re-igniting with the founding roots, which includes not just the social and practical application in faith growth, but a movement which was actively seeking to improve the lives and well being of humanity as a whole, and using those principles in the contemporary situation of the time.

Each Christian is called to find ever changing ways to spread the good news of the gospel. We are called to nourish the hungry and thirsty, to show welcome to the stranger, provide clothes for the needy, to care for the sick and vulnerable and give our time to those who are bound by their own personal prison sentence, behind bars or not.

Tabraham, B (1995). The Making of Methodism. Peterborough, Epworth Press.

I am a Methodist Minister taking up a new appointment in the North Cheshire Circuit, September 2019, with pasoral charge of Tarvin, Kelsall, Rowton, Christleton, Mickle Trafford, Oakmere & Bunburry with Tiverton churches. Views are my own.
View all posts by localpreacherforkliftdriver →
This entry was posted in Blogs. Bookmark the permalink.